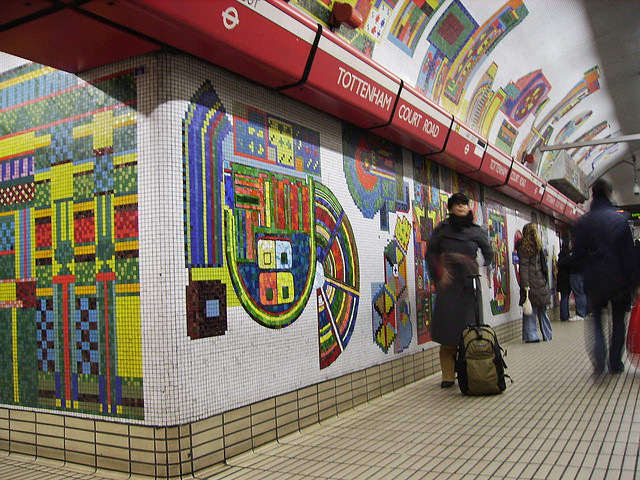 As part of a huge development project that will transform the junction between Oxford Street and Tottenham Court Road into a new public square for London, Tottenham Court Road station is being completely redesigned. The changes will transform the underground station into a transport hub by connecting with the new Crossrail station. Architectural firm Hawkins\Brown are designing the changes.

The new station will be much larger, with wide glass plaza entrances a spacious ticket hall that provide lots of natural light and create an open, public atmosphere. This will be essential to creating the right feel for the new public place the development is hoping for, even going so far as to ban cars from Tottenham Court Road between 8am-7pm Monday-Saturday.

The legacy of the colourfully vibrant mosaics by Eduardo Paolozzi that have become an iconic part of the station since 1984 will also be kept and reused in the new design. TFL (Transport For London) promised to save over 95% of the mosaics spread across the station, although the Twentieth Century Society is fighting to try and save two large decorated arches that cannot be incorporated into the new design and will be destroyed if a home cannot be found for them.

Despite this potential loss, the new station is being designed to become an even bigger public art space. New work by Daniel Buren that has been specifically created to complement Paolozzi’s original mosaics will be included alongside it and ‘Art on the Underground’ installations will give different artists the chance to showcase their work. Hawkins\Brown co-founder Roger Hawking said that the company had ‘always championed Tottenham Court Road Station as an urban art gallery’ and wanted to continue this tradition. The Crossrail station will also feature artwork by Douglas Gordon and Richard Wright.

We love the idea of the new Tottenham Court Road station, a massive public hub that showcases fantastic art, but it’s hard not to regret that so many buildings have had to be demolished to make it possible, all with rich histories of their own in the culture of the area. All we can hope is that the final result produces something really worth of taking their place.
Let us know what your thoughts on the development are and the plans for the design of the station!